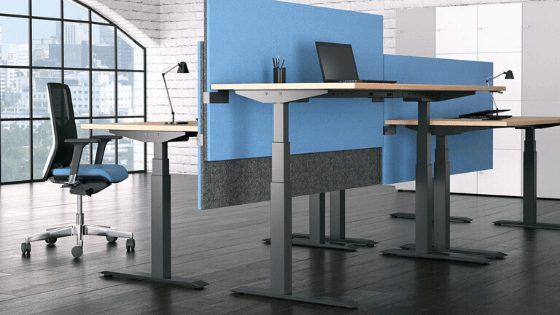 We always say a healthy workforce is a productive workforce, so anything you can do to encourage your team to look after themselves is going to pay dividends in the long run.

Consider this – in 2017, the British Heart Foundation estimated that around 20 million adults in the UK are insufficiently active and that the resulting health problems cost the NHS around £1.2 billion a year. This figure does not include the loss of income to businesses.

That’s why health and wellbeing in the workplace has become such a prominent subject recently, and organisations are popping up to encourage employers and employees alike to take better care of themselves. We like campaigns like Get Britain Standing which was set up to raise awareness of the dangers of being sedentary in the workplace. Its aim is to encourage us all to stand and move around more during the day, and it has some sobering statistics to bring to the table.

Get Britain Standing highlights the fact that the dangers of sedentary lifestyles were first researched in the 1950s, when prolonged sitting was found to result in a 64% increased risk of fatal heart problems. It also points to evidence suggesting that even when people who are active outside the office, sitting down for more than four hours every day, can lead to health problems such as cardiovascular disease, cancer, diabetes and even mental health problems. So the gym bunnies and runners aren’t necessarily in the clear.

When using sit stand desks, the advantages aren’t just health related. At the end of a six-month study of call centre workers, researchers at the Texas A&M Health Science Center School of Public Health concluded that, over the course of a few months, productivity among those using sit stand desks grew to be around 46% higher than those who were constantly seated.

In a consensus statement led by Public Health England, it was concluded that in “those occupations which are predominantly desk based, workers should aim to initially progress towards accumulating 2 hours per day of standing and light activity (light walking) during working hours, eventually progressing to a total accumulation of 4 hours per day (pro-rated to part-time hours). To achieve this, seated-based work should be regularly broken up with standing-based work, the use of sit–stand desks, or by taking short active standing breaks.”

Using a sit stand desk is a good way to encourage staff not to sit down for long periods of time – it’s not the act of sitting but the length of time we’re sedentary that causes the problems, which include muscle tightness and lower back pain. Switching between sitting and standing throughout the day will alleviate these symptoms. It will also improve blood circulation, which in turn will be beneficial for the heart, helping increase oxygen flow throughout the body, boosting the immune system and keeping our minds sharp!

A sit stand workstation is a device which provides an alternative to sit stand desks where perhaps desks are already in situ. The workstation can be elevated to your desired height to allow users to easily alternate between working in a seated position to a standing position. Options include single or dual monitor arms. The workstation can be raised higher either manually by a lever or at the touch of a button for pre-set heights.

Interested in the range of sit-stand desks and workstations we offer? Contact our friendly team to find out more.

Ergonomic seating and the importance of good posture